You are on - History of the club

SCROLL DOWN FOR THE FOLLOWING SECTIONS:-

HISTORY OF THE CLUB

CLUB JERSEYS THROUGH THE YEARS

HISTORY OF THE CLUB

A group of cyclists called a meeting at the 'Castle Restaurant' Kenilworth on 26th January 1929. It was attended by employees and ex-employees of Alfred Herbert Ltd., which was a leading machine tool company at the time. The head of the company was Sir Alfred Herbert who made many gifts to the city such as Lady Herbert's garden and the Herbert art gallery.

The Club was then known as the Alfred Herbert Cycling Club and V. Sayers was elected as the first secretary. Sir Alfred Herbert was asked to become Club president, which he accepted. He also permitted the Club to use the works canteen as a clubroom one night per week. Apart from club runs and tours, a racing programme was commenced as the 'Claud Butler 30' bears witness.

A group of hard riders from the Coventry DA of the Cyclists Touring Club felt they needed more competition riding so they convened a meeting at the Y.M.C.A. (traditional home of the Coventry CTC) on 28 October 1932 and formed a racing offshoot. They called this the Coventry Road Club and adopted the blue and gold of the CTC as their racing colours. The first secretary was L.F.Male

This period of the mid 30's, membership was nowhere as large as today so numbers were insufficient to provide marshals and helpers etc. for longer distance events. The Coventry Cycling Clubs Alliance provided the main bulk of the racing programme, the Godiva ran an open 25, the Rugby an open 50. For other races it was necessary to travel to other parts of the Midlands. With this paucity of races there naturally occurred a cross fertilisation between clubs thus leading to the amalgamation on 26th January 1936 of the Alfred Herbert Cycling Club and the Coventry Road Club. The title and colours were retained of the Coventry Road Club and A.J.Raby was elected as first secretary. A new president was elected, Mr. F.W.Hawkins who was sales manager of Triumph Cycles but when in1940 he moved to Leicester the Club then adopted the current procedure of honouring members who had given a service to the Club, with this office.

The Club prospered up to the outbreak of World War 2 in 1939. The Club was held together during the war years mainly by senior members such as Bill Smith, who reserved blocks of seats once a week at the 'Hippodrome' to enable members and friends to congregate for a show and chat. The annual Club dinner continued but was sometimes held in the county. The Club survived the war, and continued to prosper as the membership grew.

During the late fifties and early sixties, after a period of relative stagnation, the Club was blessed by an influx of younger members from the C.T.C. and elsewhere. From this time not only did the Club produce racing champions - local and national - but the social side enjoyed popularity with numerous members on all day Sunday runs, with regular Youth Hostel weekends and touring holidays. One of the highlights each year during this time was the annual inter-club week end meeting with the Priory Wheelers, a now defunct N. London club. Alternate years were spent in each others area where, after an evening’s festivities, the following morning saw friendly rivalry in a 25 mile time trial.

In 1979, the Club commemorated its Golden Jubilee with a planned programme of events for the year. The year commenced with a birthday buffet held at the Avonside, and was followed with a birthday club run starting from Kenilworth to celebrate the meeting in Jan.1929. There followed other events during the year including a cyclo-cross event, an open track meeting held at the Butts, a 50 mile reliability trial covering local roads and, a first ever for the Club, an open 50 mile time trial which attracted a high class field and resulted in a course record being established. The year ended with a very successful Jubilee Dinner held at the Allesley Hotel.

W.G.(Bill) Smith, a very early member died in September 1987 aged 79. During his period of Presidency he always organised a walk on the Sunday following the Club Dinner. As a tribute to him, the Club held the first memorial walk/ride at Rutland Water in the Summers of 1988 & 1989. It was later decided to make the event an annual walk and since 1991, a walk has taken place in local areas on the Sunday morning following the Dinner.

The Club celebrated its Diamond anniversary in 1989 although on a much smaller scale. This event was marked on January 29th by members meeting at Kenilworth Castle for a club run ably led by Ron Atkins, then the following month an evening buffet/disco was held at the Spinx club.

In August 1993, the Club organised a grand reunion rally at Baginton village hall. This was the brainchild of Ron Atkins and a total of 170 people attended and enjoyed a splendid day where many older members were reunited and reminisced among an exhibition of photographic nostalgia and Club memorabilia.

2009 was the 80th anniversary of the club marked by a dinner at St Mary’s Guildhall, it was a roaring success with 111 attendees celebrating the rich history of the club.

The Guest of Honour was the Lord Mayor and Lady Mayoress of Coventry: Cllr Jack Harrison and Jill Harrison and the Guest Speaker was former Paris Roubaix winner Magnus Backstedt. Club members past and present and their guests and representatives of the local cycling clubs came along to swap stories of yesteryear and celebrate in the current achievements of the racing members. The age gap spanned from 18-80+ as some ex members from 50 years ago turned up on the night. Dinner was served followed by the prize presentation and then two life memberships were bestowed on two of the club’s stalwarts – Dave Miller and Roger Gillitt. The highlight of the evening was the Lord Mayor recognising the valuable contribution that these two had and continue to have made by letting Roger wear the Lord Mayor’s Chain of Office for a short while. It was a truly spontaneous gesture by the Lord Mayor and really was the cherry on top of the cake for such a memorable night.

club jerseys through the years

The picture is of the display of Coventry Road Club jerseys in the Coventry Transport Museum.

Details of some of the noteworthy performances by Coventry Road Club members. 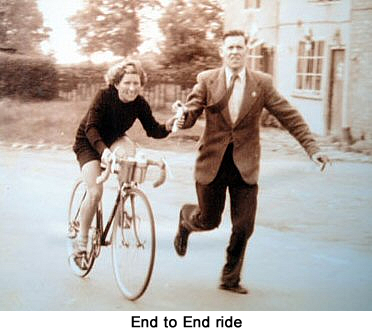 Born Edith Sharman, married to Ron Atkins in July 1940, and mother of John and Joy, died as the result of a road accident in August 1999.

As a teenager, Edie was a prolific champion gymnast and a member of the Coventry Meteor Cycling Club, but joined the Coventry Road Club in 1939. Her successful long distance cycling attempts were supreme during the early 1950’s when she held many W.R.R.A. place to place amateur road records. She became the first woman to exceed 400 miles in 24 hours during a road record attempt, achieved in the Coronation year of 1953.

As a member of the Ladies Coventry Road Club team she won R.T.T.C. team championship medals in 1949 and 1950. As a result of her exploits during this period, she had the honour of signing the Golden Book of Cycling in 1953.

Ron Atkins has a vast collection of mementos depicting the colourful, action packed story of Edie’s gymnastic, cycling and working life. The R.O. Harrison racing bike which Edie gained all her road records is now on display in the Coventry British Transport Museum.

As a wife and mother, she had led a full and active life and her time spent in service to the Road Club was unsurpassed. She carried out many official duties for the Club as well as finding time to enjoy social and racing activities. In recognising her ability, devotion and enthusiasm, the Road Club in 1987, awarded her life membership.

The Coventry Road Club wished to perpetuate Edie’s name in the form of a trophy. This trophy was subscribed to by members of the Road Club and with the agreement of the Road Time Trial Council, to be awarded to the winner of the Women’s Circuit Time Trial Championship.

The trophy was presented to the R.T.T.C. and subsequently awarded for the first time to Natacha Maes (In Gear RT) at the Women’s Circuit Championship event promoted by the Stourbridge C.C. on 9th September 2000.

Edie is listed on Wikipedia, clck here to view 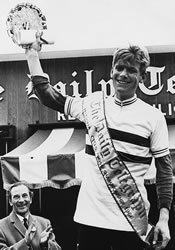 No doubt influenced by his parents Edie and Ron Atkins, John joined the Road Club in 1948 at the age of 6, he started racing at 17 and first won the National Cyclo Cross Championships in 1961 at the age of 19 repeating this success a further eleven times. Five of these wins, in 1961,'62, '66, '67and '68, were in the Ameteur Championships and John also led the Coventry Road Club to three team victories in 1962 with P.Morgan and M.Miller, 1963 with M.Miller and C.Townsend and 1968 with D.Bassington and C.Dodd.

John also placed fifth in the 1968 World Ameteur Championship in Luxembourg. To date, no British rider has bettered this Cyclo-Cross World Championship placing. 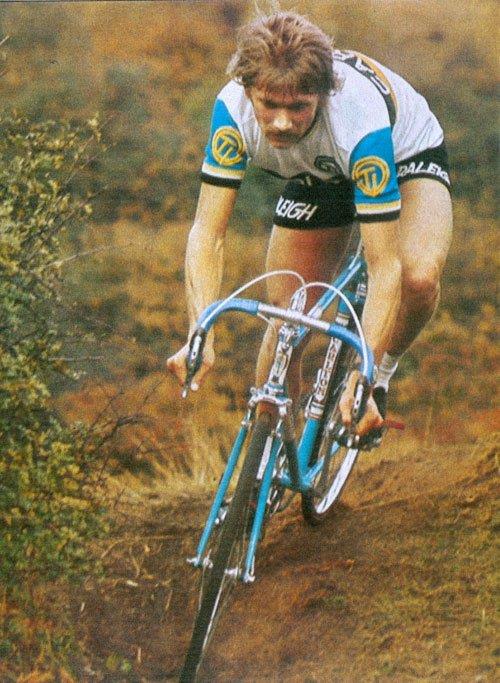 John turned professional for the 1969 season, initially riding for Mash and Baxter, managed by David Duffield (later famous for his unconventional TV cycling commentry). The following year he signed for Carlton Cycles, switching to Viscount Shimano in '75 and, for the final year of his professional career, riding for Harry Quinn Cycles.

Winning the Professional National Champion for six consecutive years from '69 to '74 and the Open Champion (pro and ameteur) in 1977, he became the most prolific winner of National cross tiles on record and, with second place in '63, '75, '76 and '78, he was rarely off the podium.

After retirement from professional cycling John continued to “keep his hand in”winning our clubs Senior and Veteran BAR Championships in 1997,1998, 2000 and 2001.

In 1976 John Aktins Cycles was opened in Coventry, John ran the business until 1982 but the shop continued to bear his name until 2007.

John is a Life Membership of the club but moved to Wales in 1982 and now rides with the Harlech Wheelers.